Darlington Primary is located on a beautiful site in the heart of the Darlington village in the hills east of Perth. The school celebrated its Centenary in 2012. An original room from the 1912 Darlington State School is still in regular use.

The DPS had its earliest beginnings at “Leithdale House” in 1912 when 19 students were enrolled under Head Teacher, Miss Emma Hogan. With a strong demand for a permanent school to be built, the current site was chosen and the first classroom built and occupied in October 1913. As Darlington grew so did the school, with a second classroom added in 1916 and a third in 1924. Miss Hogan served as the Head teacher until illness forced her to take leave in 1919 and finally to resign in 1920 when she returned to England.

World War 2 brought a large influx of new residents to the hills with the result that the neighbouring Congregational Church Hall was used as a classroom to accommodate the increased enrolments. This hall, being no longer required by the church, was removed in 1951 and re-located to Bencubbin. The students then used the newer United Church Hall until the 4th classroom was built in 1956. This is now the only remaining classroom on the site of the original school. The boys shelter shed which was built around 1924 also remains on –site.

By the 1960’s there was a need to upgrade the school to cope with the increasing demands of the Darlington population. In 1963 a new school was built on the existing property and more land was gradually acquired from adjacent properties to expand the facilities which included a canteen and undercover assembly area, library, kindergarten, preschool, playground and oval whereby the footprint of the school has now doubled.

The primary classrooms are well-appointed. The Early Learning Centre for pre-primary and kindergarten students provides a magnificent environment for early learning. Other facilities at the school include: a well-equipped library and computer laboratory; music and art rooms; and a covered assembly area.

The school maintains a long and strong tradition of providing quality education for children from the local area. It is not uncommon for current students to have followed their parents and grandparents in attending the school.

In addition to the educational programs in all eight learning areas all P-6 students engage in a range of specialist classes including: a highly regarded visual arts program; music and rock band activities, inclusive of the School of Instrumental Music program; and a comprehensive physical education and sports curriculum.

The Kindergarten and Pre-primary programs are well regarded locally and in surrounding areas for their high quality.

Students come from families who value education and they are well prepared for school.

This is reflected in the standards of academic achievement and behaviour attained. The school benefits from the support and involvement of an active and well-informed School Council and a committed group of parents who form the P&C.

Our School Emblem – The Dibbler 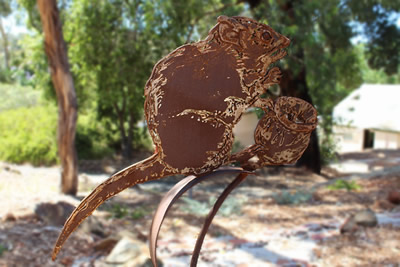 The dibbler is the main part of the school’s emblem, where it appears looking over the top of a banksia flower. It was chosen as our emblem because it once lived in the hills around the school.

The emblem was designed in 1972/73 by the class taught by Art teacher, Mrs Anne Nemeth. There have been attempts to have a more stylised drawing but, each time, the school has voted to retain the little figure on the banksia flower.

When we look at our emblem, it reminds us to be proud of our school, determined to show initiative, trust and tolerance, and work to protect our native flora and fauna.

In 2015 a bronze sculpture of the dibbler was presented to the school and is situated in the gardens near the school entrance.

The school is located on a beautiful three-hectare site in the heart of the Darlington village, in the hills east of Perth. In 2012, the school celebrated its Centenary and maintains a long and strong tradition of providing quality education for children from the local area. It is not uncommon for current students to have followed their parents and grandparents in attending the school.

Learn more about our school...

Our vision is to provide a caring, holistic and challenging learning environment that nurtures and celebrates individual potential.